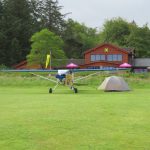 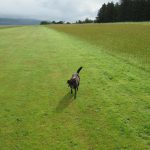 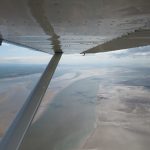 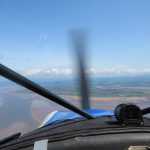 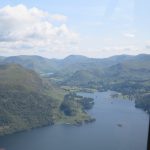 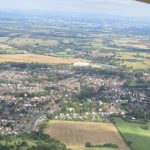 After flying to Scotland’s west coast yesterday, we thought, we would have escaped the bad weather all around. Well, we were proven wrong! After a great sunset, we woke up and it was raining again. So after breakfast I gave Hugo a good walk on the beach and we assessed our options.

Kirkwall was of the list already. Sollas Beach had IMC. So the only option was to go to Oban, get some fuel and go south. After checking the endurance and the tailwind, we defined Welshpool as our final destination for the day.

The flight to Oban was rather uneventful but even more beautiful. We soared long the sound in between the islands at about 1000ft with the clouds obscuring the island mountain tops. About half an hour later the landing on Oban’s big concrete runway occurred and we got serviced with fuel almost immediately.

Just about half an hour later we back in the air and for the first time on this trip really heading south.

First we hoped from island to island and finally jumped over to the mainland south of Prestwick from where we crossed the Southern Upland with quite low clouds. From Carlisle on the weather improved greatly and there was even some sun shining threw the cloud gaps.

Next was the Manchester area. So we asked Manchester Radar to get a clearance threw their airspace but where kindly offered to fly the low level VFR corridor between Manchester and Liverpool at 1000ft right across the cities. With all the thermals it was quite hard to maintain altitude and not accidentally climb into the controlled airspace.

The last bit to Welshpool was really easy compared but the weather began to close in again. We landed on Welshpool’s runway 04 after good three hours of flying.

That place to stay

Unfortunately it was not allowed to camp on the airfield. But the office people quickly found us Alun and Joyce’s B&B just five minutes driving from the airport. We even got picked up! If you want to stay in Welshpool, stay with them!