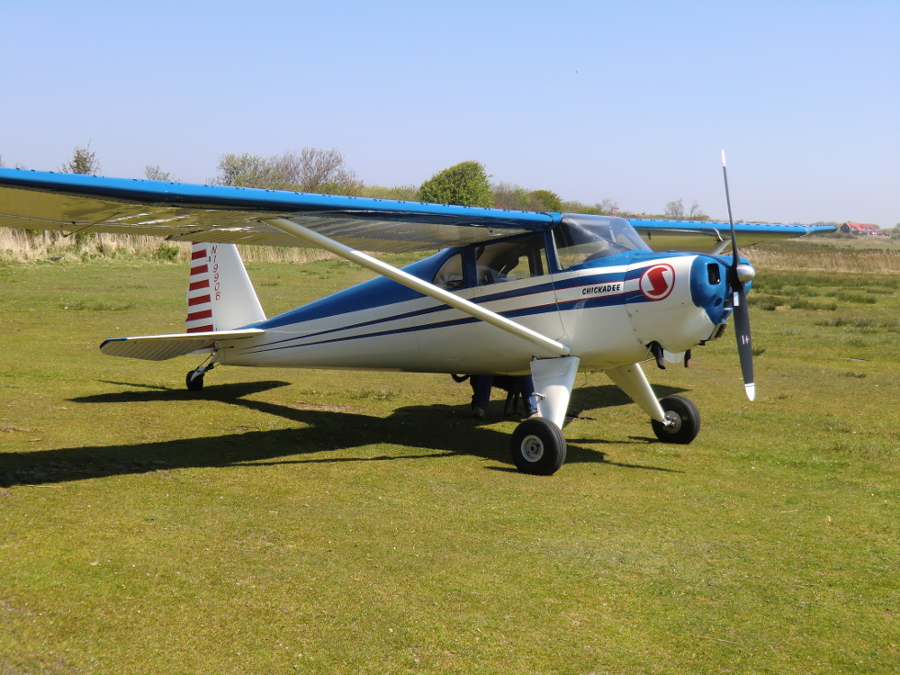 N1990B “Chickadee” is Luscombe 8E. She was born in February 1948 in Dallas, Texas by Luscombe Aircraft Corp. In her day she was one of the first all metal light airplanes ever made. Her inventor Don Luscombe praised her with the slogan “No wood, no nails, no glue!” Later in the 50’s other manufactures like Cessna and Piper adopted this construction method.

90B was originally built as an 8A mode. She featured a Continental A-65 engine (65HP) and a 10 Gallon fuselage tank behind the seats. In 1985 she got converted to an 8E model and got the Continental C85-12F (85HP) engine with electrical system and two 12.5 Gallon wing tanks installed. She also got a 70″ fully aluminum 2-bladed McCauley propeller. With that she comfortably cruises at 95-100 MPH and got a range of about 430nm.

Her name “Chickadee” goes back to our father Volkhart who’s German nickname amongst pilots was “Meise”.

Formerly 90B was based in Louisville, Kentucky. After we bought her, Florian traveled there and and prepared her for shipping. With a lot of helping hands her wings and empennage were taken off and everything was put into custom made wooden fixtures. After four days of work in freezing cold December winds she was packet inside a 40ft container and began her journey to Germany.

Six weeks later she arrived at her new home base Celle-Arloh in Lower Saxony, Germany. Many club members lend a helping hand unpacking and storing all the different peaces inside the hangar. Then the painstaking process of reassembly began and finally since March 2015 she is back in the air.

A huge thanks to Wolfgang Hübel, FAA A&P IA, who helped us with all the paperwork after this “major repair”. Also thanks to Jürgen Pfeifer who, as a Luscombe owner, provided several good tips. Last, but not least, thanks to Detelef Heun from Aircraft-Trust who managed the shipping and export for us and is now our agent for remaining in the US registry.

But you still might ask, why dos this airplane still has it’s US registration number anyway? Well, simply because US authorities are more flexible in maintenance and alteration and in the end are cheaper. And as long as the ICAO protects us, we see no need to switch to a country where the government secretly tries to restrict general aviation more and more.