Well, Hugo was rescued from the local animal shelter  and since he likes exploring new places, he likes to fly. To read the full story, check his sub page!

Hugo is a rescued dog, probably born in 2010. He was found in 2015 tied to a light pole at Gifhorn train station in northern Germany where he was found. Than I was brought into Gifhorn’s animal shelter in Ribbesbuettel. I don’t know much more about his previous live but from his behavior, one must assume, he was mistreated regularly.

Late summer 2015, I went to the shelter my fist time just looking to have a walk with a dog and still not completely sure if I should take full time responsibility for an animal. But anyway, they gave me Hugo for a walk and he was instantly working with me and already following basic commands.

Since I still had some renovations to do in my new house, Hugo stayed at the shelter but I went there almost every day to have a walk with him. After just a couple of days, maybe two weeks he had figured out how I opened the front gate and started barking in his kennel immediately. If I hadn’t been sure if I should take him home with me, I definitely was at this point.

Another big point for me was if I could take him to the airfield with me. So after one walk from the shelter, I started opening the car door just a hair and he jumped on the back seat right away looking like “what adventure are we taking on now?”. So driving wouldn’t be a problem either.

Since I am an aviator, sooner or later Hugo had to learn how to fly. And many times I have been asked how  I trained Hugo to fly. But before I explain, a little disclaimer: I am neither a flight instructor nor a dog trainer what so ever, this is just my personal experience.

The first thing I introduced Hugo to was our home airfield itself where we walked on the apron, worked on the airplane together and so on. All with a leash off coarse. Since the airfield is just a little grass strip with almost exclusive club traffic, I also wanted to let him roam unleashed, so we trained that he needed to come close by my foot whenever there was airplane noise. And to this day, it works pretty well!

Next exercise was to get familiar with our Luscombe. So when I worked around the aircraft, I let him sit inside and just watch what I’m doing. Later we intensified this by pushing the airplane out of the hangar with him inside and taxi to the fuel pump. 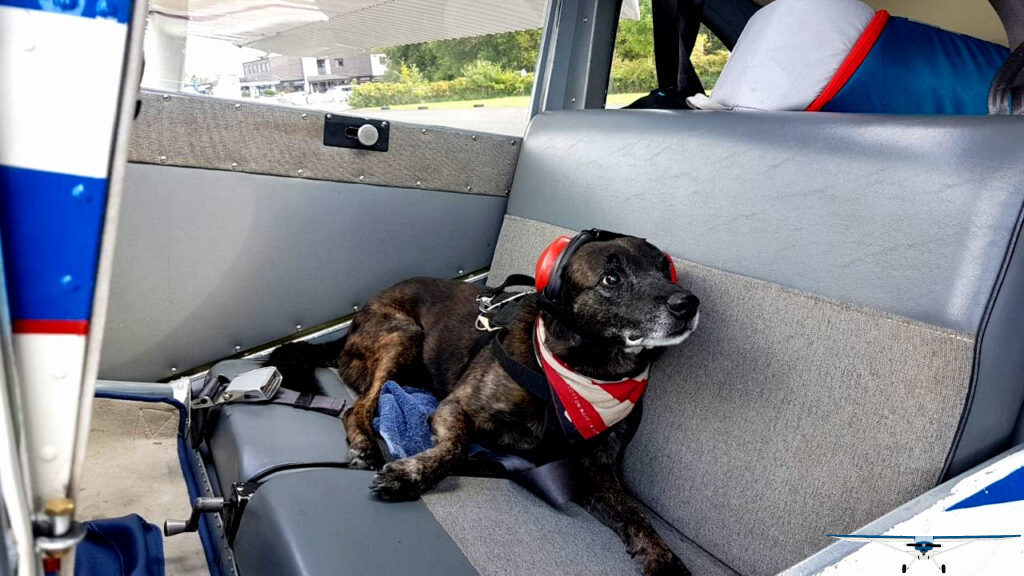 Also in the meantime he got more and more used to his flying gear where we use his normal harness from the car with two custom made straps to hook the D ring on his back the the two attach points of the lap belts on his seat. He also wears MuttMuffs during the flight which he takes off as soon as I take the throttle back and start the descend.

When we finally flew together for the first time, it was just a short hop around the local area, but with time, flights got longer and longer and now, Hugo is a seasoned flyer! 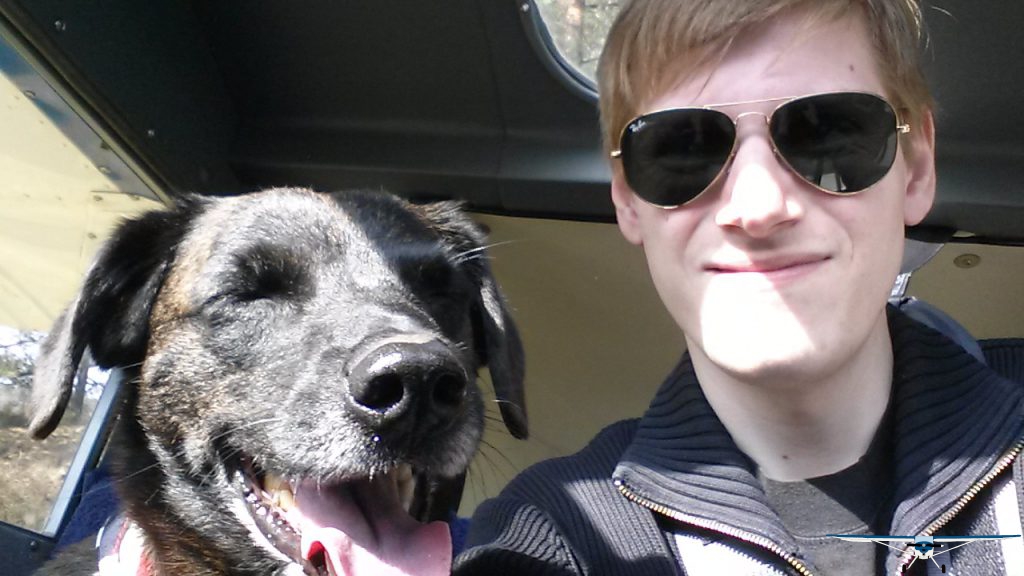 Florian and Hugo inside N1990b’s cockpit.

During the bad weather season of last winter I got myself a new copilot. Hugo a 6 year old dog I adopted from the animal shelter joined me for his first flight in an airplane ever. After getting used to the noise he seemed to enjoy the ride. As a first trip we did a a 20 minute flight around our home town Celle.