Another Day, another flight

After a good night’s sleep with Alun and Joyce’s B&B it was time to leave Welshpool and had south to the coastline again. Alun was kind enough to take us back to the airport and we fueled up 90B.

After everything was prepared, we just took the advantage to have a look at one of the Helimed Choppers based in Welshpool, which was quite fascinating. You do a really good job guys!

Finally in the air, our first heading took us towards the mouth of the Bristol Channel and then further south towards Southampton. There we encountered a similar situation like in Manchester and advised London Information that we would like to stay low and fly the VFR corridor between Southampton and Bournemouth. Therefore we were handed of to Solent Radar but these guys refused to talk to us. I have no idea why…

Just after the VFR corridor, our last task was to hop over the solent and fly around the Isle of Wight to land in Sandown. This was the first airfield we found in Britain, were there was something like a systematic approach to parking aircraft. After setting up our tent and working on our dinner, we figured our why.

The sun was setting already and the airfield became quiet when an old Landrover approached us. The guy behind the wheel was really happy to have us stay on the airfield and it turned out he was half German! And that probably explains the order in which the operation is conducted there. We really liked it.

Another goody: Sandown is completely prepared. You can rent an e-bike to go to town and they even have multiple showers for campers. Also the hole place is completely dog friendly. We will be back some day. 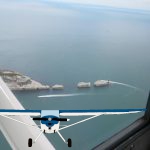 The Needles, Isle of Wight 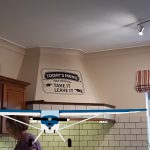 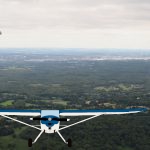 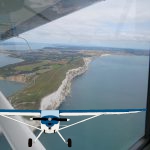 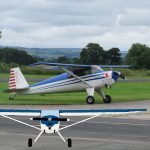