As Helmut has told us, we had only about two or three days left to get back home because another low pressure system was moving in from the Atlantic.

Originally we had planned to continue southbound from the Isle of Wight and to fly to Alderney in the Canary Islands. Then we would hop over to France and follow the Normandy coast towards Belgium. Now the weather approaching we needed an escape route again and so we decided to follow the British coast and do the Channel crossing at Dover towards Calais that day. The evening we wanted to spend in Brussels with Lady Bush Pilot.

The perks of flying a vintage airplane

Not just the weather got back on us again, now the airplane did it , too. During preflight I discovered that the actuator arm of the carburetor heat has broken. I couldn’t repair it without taking the propeller and cowling off and fabricating a new arm. So that one needed to wait until we would be back home.

The only problem was that without its connection to the actuator, the air intake flap drops to half warm and in a 85HP airplane loaded to the top with camping gear and fuel you don’t want to sacrifice power that way! So I got us a cable tie from the  AFISO and was able to secure the flap to all cold. That way I lost my carb heat completely but still got full power out of the engine. With high summer temps I reckoned it would be safe to fly that way and planned all descends as either with cruise power of as power of within gliding range of the airport.

A little downside of this work: I got my hands quite dirty and couldn’t get any soap to clean them.

After departure we turned slightly north again to cross the Solent back to mainland Britain again. From Southampton we followed to coastline until Dover. London Information was a great help here. Because of the weather many airplanes we fleeing to France and especially between Dover and Calais it got quite crowded. The clouds did help either since the restricted all traffic to stay below about 2500 ft.

After passing Southampton London Information asked us about our intended coast-out point and out ETA over it. After providing that information we immediately got word which airplanes were scheduled to overfly the coast in that region close to our time. And so it came. The reported Siai Machetti passed to our right about five minutes on to sea and the reported german motorglider reported just behind us.

Mid Channel we were handed over to Lille Information who just provided us with the information that there was parachuting in progress at Calais airport and released us to Calais Info. We did read the parachuting NOTAM before takeoff so that wouldn’t be a big deal. But we also got a NOTAM that AFIS would be in operation during our time of landing but nobody answered the radio. I guess that is french interpretation of time tables…

Landing at the Gateway to the Continent

So still unsure if the jump-plane was still in the air or not I decided to just make a series of position reports and the for the jump-pilot to speak up. As no one opposed my intentions I went ahead for the approach.

The wind was blowing inland right across the runway at about 15 to 20 knots. The landing was a good workout thow it went smoothly and we taxied up to the fuel pumps. Usually in France you have a self-service pump using the TOTAL carnet but this didn’t even have a card reader installed. My stunning must have been noticed by a fireman who came out to assist me and he told us that he would write a receipt which we should pay in the terminal together with the landing fees.

By the way, we selected Calais to enter back in to mainland Europe to be able to clear customs but no officer was seen there. After about two hours we decided it was time to take off again.

Third country in one day

After a delicious lunch in the airport restaurant we were reminded to be back in a country known for its great cuisine. Thereafter we filed of next flightplan to Grimbergen in Belgium and I gave Hugo a walk until we waited for the departure time to arrive.

While walking around the apron we came across a local pilot who advised us: “Unless you don’t want to have a very good look onto a Mirage, turn right after departure as soon as possible!” What he meant was the prohibited area around the Calais nuclear plant. With the French State still being in a state of exceptional circumstances because of the recent terrorist attacks in Paris, Nice and Strasbourg one can understand their uneasiness when somebody flies to close to a nuclear plant.

Because of the airspace structure ahead we did only climb to about 1000ft before crossing into Belgium. There we had to stay below the Brussels class C airspace almost the entire time.

After a little over an hour it became time to land at Grimbergen which is actually embedded into the Brussels CTR. Therefore when Grimbergen is active thy slice a chuck out of the CTR and declare it as class G. But for the approach you have to fly a very strict route and exactly 900ft as Brussels continues at 1000ft and you can’t even go lower because of the noise abatement procedures.

After reaching the airfield from the west you have to pass midfield for a tight pattern. Remember, Brussels starts from the ground up about a mile east of Grimbergen.

When I first talked to Valeria aka Lady Bush Pilot and asked her where I could stay in or near Brussels, she just came up with “You can stay at my place!”. When we landed she was already there picking us up and after securing the airplane we drove into the heart of Brussels. After parking in the back of a block of flats, I expected that Valerie would offer me a couch or so but she said: “Lets got up to the top floor. I have a flat for friend there.” What???

Later that evening we went to a not to cheap looking restaurant and I began to feel a little bit guilty because I still had dirty fingers from fixing the plane in the morning. Inside Valerie recommended the steak so I took it and it was delicious! After the dinner when I came back from the restroom she even had paid everything already!

Valerie, thank you so much! I never expected such a hospitality!

As Valerie had already flown her Super Cub around Africa we had quite a long chat what I should do and who I should meet. She really is a wealth of informations! 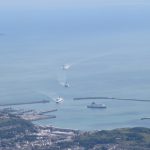 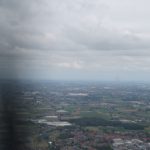 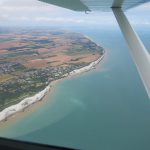 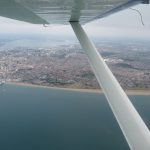 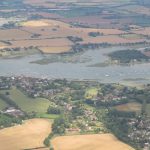 Sailing Regatta near the Solent 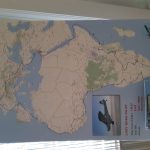