Quite early in the morning we were woken up by a lot of cars that seemed to drive around the airfield. But after looking out of the tent we discovered that a flea market war set up right next door.

After really waking up and getting some breakfast we said good bye to the really friendly people of Classic Wings in Clacton and headed on to Duxford just around the corner of the Southend CTA. Originally we had in mind just to get some fuel and to continue on northbound as we didn’t expect to much going on there outside the airshows. Well, we got taught differently!

Duxford is worth a visit!

Once we tuned in Duxford Information the radio went crazy! “Corsair turn downwind 06, give way to the Spitfire on long final! …” We finally sneaked in between the warbirds and managed to park next to a T6. Even the fuel truck coming over was vintage! (Sorry, forgot to shot a photo.)

When paying our landing fees in the visitor center of the Imperial War Museum we even got a ticket to enter the exhibition hangars. As we roamed around for some photos, we came across a guy in his twenties polishing a Tiger Moth on the apron and started chatting about airplanes. Then he mentioned “Well, we are selling rides…”

What should I say, it was a blast! Once clear of the traffic pattern, I got the controls and could experience this WW2 pilot maker first hand. And believe me, the left turning prop will tick you off!

After that awesome flight, we got back to 90B how had be accompanied by a corsair in the meantime. After climbing back on board, we took of and headed beside Cambridge north to our final destination for day: Currock Hill.

Glider People are the most friendly!

Currock Hill glider site is located just on the west of the Newcastle CTA and operated by the Northumbria Glider Club. The approach is a little challenging since you have to get in contact with Newcastle Radar before since you are crossing their airspace. Once that is done, they will hand you of to Currock Hill Radio.

We landed runway 06 which is a little downhill at first. If you don’t stop within the marked 500m runway, you kind of plunge down a hillside which actually is the parking area.

As usual glider people are the most friendly in aviation. We didn’t even stop the engine before the first guy pulled up trying to ask I we would need anything. They invited us for a cup of tea and we could pitch our tent next to the airplane. A nice feature, they do have a shower if you plan on camping.

After a great sunset view over the Tyne valley it was time to head to bed.

Tomorrow, we will make our first stop in Scottland. 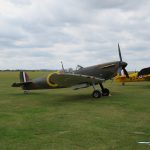 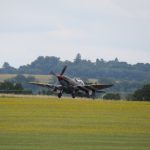 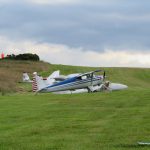 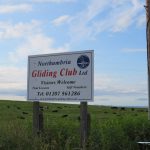