What did Helmut say? You have two or three days left until the weather catches up with you… (Day 9)

After a good nights sleep in the heart of Brussels Hugo and I woke up for a very good breakfast with Valerie. After chatting a bit more and getting some tips for my Africa adventure it became time to head for home. Valerie was kind enough to give a ride back to Grimbergen were 90B was still waiting for us.

VFR or not VFR, this is the question!

As Helmut had predicted, the weather deteriorated. On this Monday morning we had overcast at about 1200ft. But VFR was still an option as airspace limited us to 1500ft anyway. So we filed our flightplan to Celle-Arloh and after a walk for Hugo we took off northbound.

Initially we had to stay at exactly 900ft like for the approach to duck under Brussels class C airspace. After getting out beneath that it was time to make a very distinct turn to the east to avoid the Antwerp CTR. From there on is was staying low but flying continuously towards Germany.

A funny moment came up when Langen Information asked us south of the Buckeburg CTR “N1990B, are you still there?” – “Of course!” – “Well, your transponder signal just disappereared.” Upps… After a short look I found the problem: The fuse had just fallen out of its holder and after reinserting it the transponder magically started working again.

Now we just needed to cross the Hanover CTR before landing at our home field Celle-Arloh. Overall it was a great trip at which we covered five countries and over 1900nm in almost 25 flight hours. Let’s see, what we do next summer. 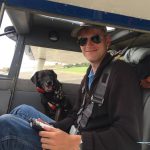 Hugo and I, ready for departure 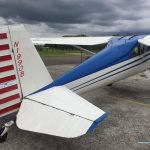 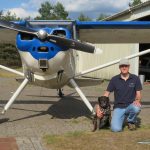 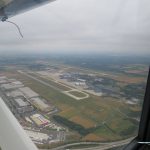 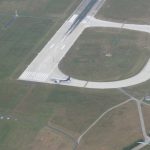 Aeroflot lining up 09L in EDDV 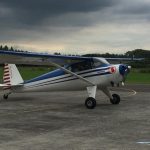