Last weekend my flying club had planned a day trip to the Diepholz Airbase Flyin 2019. Unfortunately the day didn’t start well as we met at our home field Celle-Arloh in pouring rain.

So, somebody brewed coffee and we sad in the clubhouse to wait for a clearing in the weather.

Fortunately, Celle was just to the edge of main band of precipitation. So my copilot Rainer and I departed on the soaked runway but left the rain behind us just 5 minutes after departure. At about 1.500ft we followed the north bank of the river Aller towards Nienburg and then turned slightly south to Diepholz. The flight from there on was uneventful.

Because of the airshow a special arrival procedure was in place. From lake Dümmer we flew northbound and joined a right hand pattern for runway 08. Since we needed to vacted at the last (and only) taxiway and because of the high volume of traffic, I decided to play a little and hold the airplane in ground effect with little power right until the end of the runway. Touchdown, right turn and almost at parking position!

A stroke of luck…

Before we planed to have a burger for lunch, we approached a Dornier Do28 parked on the edge of the apron. As we sneaked around the plane to get some cool photos, a guy with a military looking flight suit stepped out of the plane. As he saw our aircrew badges he offered a ride in this historic bird. This was a really cool experience but next time, I will carry my headset! It was incredibly loud!

Tiger in the Lunenburg Heath

Late afternoon we decided it was time to head back to Celle. As we ventured around we got reminded that the military exercise Green Griffin was in full swing.

I called out “Traffic 12 o’clock, same altitude, no factor, possibly gyrocopter”. The problem was, these gyros (yes, it turned out there were two of them) were at least as fast as our Luscombe. That couldn’t be true. Near Nienburg one of the two suddenly turned around headed towards us. It was a military Tiger Attack Helicopter!

As he saw us, he frantically showed all his lights and even (re)enabled his transponder and then passed about 100ft below us. Then his buddy came from the right. So what was going on? Did they wanted to have fun?

Anyway, we were in notamed airspace, but the NOTAM only warned about military traffic. There was no flight restriction! So in my opinion, it was rather strange to see powered aircraft in class E airspace without exterior lights and without transponder doing reckless maneuvering!

Last but not least…

… some impressions of the day. 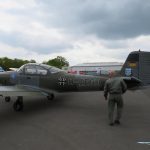 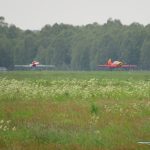 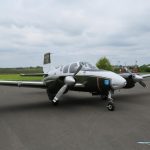 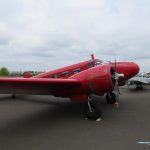 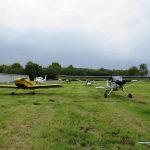 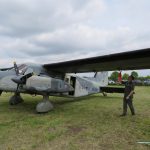